lev·er·age (verb): Use (something) to maximum advantage.

Picking the right state for retirement can save you a great deal in taxes. Leveraging state tax laws can be an important part of your retirement plan. But it’s trickier than you might think.

But in retirement, not all income is equal.

Arkansas is in a unique position. The Natural State is a perfect example of state income tax getting more nuanced for retirees.

I include these together because these mountain states have very similar retirement tax rules.

This is rather obvious, but it sets up my next point well: These nine states do not tax income at the state level. The states are Alaska, Florida, Nevada, New Hampshire, South Dakota, Tennessee, Texas, Washington and Wyoming.

But Illinois, Mississippi, and Pennsylvania join this club when it comes to retirement distributions. Any income from a 401k, IRA, or pension is not taxed at the state level in these three states.

I am a huge Kansas State fan. I, along with nearly 50 relatives, got my degree from KState. Most people associate Kansas State with our legendary football coach, Bill Snyder.

What made Snyder so special was that he could always find small opportunities to leverage into unexpected wins.

During his first tenure (’89-’05), he was one of the first coaches to recruit junior college players. He exploited this strategy like a master. From 1994-2003, Kansas State was ranked in the top 10 at some point in the season every year and averaged 10 wins each year.

This level of success is virtually unattainable for any college football program outside of the 7-8 bluebloods. In 1998, we were seconds away from the national championship game before a miracle Texas A&M upset.*

During Snyder’s second tenure (’09-’18), college football had changed significantly and he wasn’t able to recruit the same level of athletes he did during his first run. But he used special teams, pace of play, and a unique offense to leverage incredible success. In just his 4th year, he again had Kansas State 10-0, ranked #1, and on the brink of a national championship appearance.

What Does College Football Have to do With Retirement Taxes?

Snyder was called a wizard because he found small opportunities and exploited them in massive ways.

You need to do the same with retirement taxes. The way to leverage your tax opportunities is through asset location.

If a state doesn’t tax some of your assets, but they will tax other assets–what should you do?

You should make sure that the tax-free assets grow more than the assets subject to income tax. If you’ve read the story of Jacob and Laban in the book of Genesis (Jacob devises a plan for his livestock to grow more than Laban’s), this is a similar idea.

The term for this strategy is asset location.

How to Use Asset Location

Many investment firms will follow a protocol similar to this:

Essentially, most firms use asset allocation and asset location interchangeably. If you have a Roth, brokerage, and IRA account, they will take your funds and throw the exact same portfolio in all three accounts, like the image below. 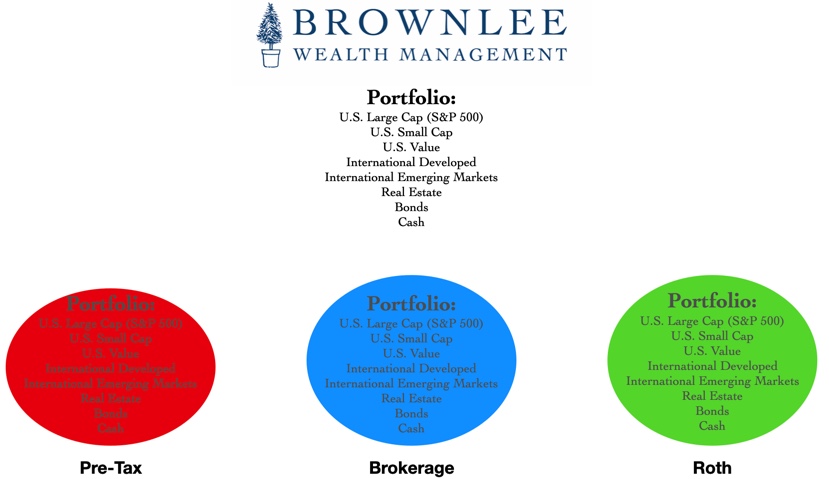 This is a pretty substantial mistake. If some of your accounts have a massive tax benefit like a Roth (doesn’t get much better than tax-free), then you should place the positions with the absolute highest growth potential there.

If other accounts are punished for growth in the form of higher taxes, you should put your lowest growth positions there. 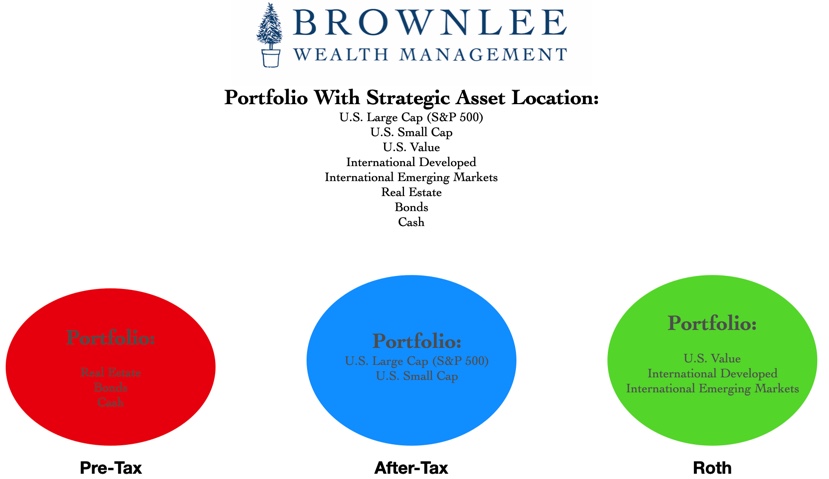 It’s pretty intuitive. If your IRA is a ticking tax bomb, implementing a different portfolio in each account, as the image above shows, can be a great solution. As the image shows, you likely won’t follow this idea completely because most IRAs are far larger than Roth IRAs (i.e. you are going to have some stock or real estate exposure in a pre-tax IRA).

I mention this one idea a lot: Timeframe should dictate how you invest.

If you need money in the next two years, you probably shouldn’t put it in the stock market.

But if you’re not using a specific account for ten+ years, you should likely put the vast majority of it in a diversified stock portfolio.

Timeframes should be an even larger dictator in your investments than your risk tolerance. And a way larger dictator than where you think the market is headed in the short-term. With that being said, asset location works very well with this rule.

A Roth account should be the absolute last money you touch. If you can compound your money in a tax-free account, you should let that compounding work for decades before touching it. You should empty virtually every other account in your balance sheet before touching the Roth.

What About Social Security?

Social Security strategy can also be treated like a Roth depending on your state’s tax laws. What do I mean?

Just like the Roth, you want to maximize the value of tax-free assets. I really like delaying Social Security in many situations anyway, but if your state does not tax Social Security, that’s another reason to delay and maximize your benefit.

*This game is why, despite my wife choosing Texas A&M for law school, I will always have a grudge against them.

How Do You Evaluate a Portfolio? Three Mistakes to Avoid

Why Are High Income Millennials Not Able to Save?