What if you Retire Right Before a Market Crash?

I was pretty sure there was something illegal in that brisket. I had never tasted anything like it in my life. It was the highest form of beef I have ever experienced. I started to become a little obsessed with the idea. I quickly tried Corkscrew here in Spring (and now go almost once per week), then Tejas in Tomball, Truth BBQ in Brenham and Houston, Pecan Lodge and Terry Black’s in Dallas’ Deep Ellum neighborhood, and several others. Now, I am borderline addicted.

I don’t even get sides! I can get potato salad anywhere. But, the brisket? There are maybe ten pitmasters in the world that can smoke a brisket like Will Buckman (Corkscrew BBQ).

If you can’t tell, I’m thoroughly convinced that Kansas City BBQ, while very good, is not in the same universe as the moist brisket found here.

Kansas City does burnt ends instead of moist (or fatty) brisket. In short, they’re taking the fattier part of the brisket, chopping it up into pieces, and covering it in BBQ sauce to finish cooking. It is very good, but, it’s also the easy way out. To smoke Central Texas moist brisket, you have to stay intensely committed to a perfect fire for 12-18 hours, on top of several other things. It is labor. And the great ones don’t do it once, they do it every day with dozens of briskets. There is no shortcut.

How does this apply to not running out of income in retirement?

Well, there is no shortcut if you want to be financially independent enough to stop working. Retirement planning has two main questions:

That’s why there is no shortcut. Retirement is (usually) an irreversible decision. You likely won’t be able to retire at 62, realize you don’t have enough money at 74, and find similar work at that time. You need to have sufficient savings before your last day of work ends.

Now, the 2nd question, how do you avoid running out of money? That’s why your investment plan and your income plan are so important. Your financial life has three stages:

When you are 25-50 years old, you’re an accumulator. You’re trying to earn as much as you can, save as much as you can, and invest it well. Still, during this time, you have some room for error. If you’re 28 and you want to have a position in TSLA, it probably won’t crush you if TSLA nosedives.

From age 50-65, you’re in preservation mode. If you have an unusually high income, or received the Anadarko COC, this stage might come earlier. In this phase, it’s still critical to earn and save as much as you can, but the stakes begin to get a little higher. While I don’t condone any high concentrations of individual stock at a young age, it’s survivable, as I mentioned above, when you’re young. It gets riskier in this stage. If you’re in this boat, you need carefully examine your portfolio and your NUA situation and ensure that you are not overly concentrated in any one stock, industry, country, or asset class.

Distribution-age 60/65+. This is gametime. Your investment decisions and your income plan is magnified. The consequences are very real. Unless you have drastically more assets than you need, there is no excuse to have overly-exposed positions.

Where is your financial security coming from?

As the illustration below shows, your financial security is entirely dependent on your portfolio in the distribution phase. 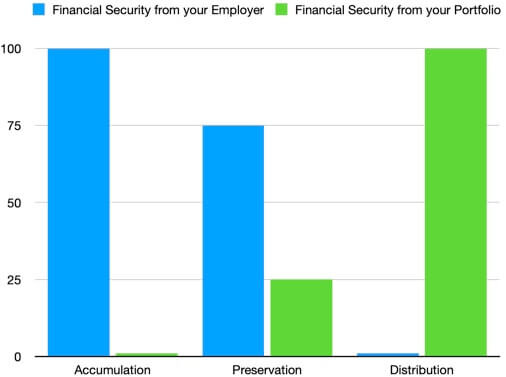 What if there is a pandemic in the first year of my retirement and the market crashes?

Planning in Timeframes
This is where portfolio construction and decumulation come into play. In plain English, you need a sensible investment strategy and a sturdy plan to take income from those investments whether markets are good or bad.

It’s helpful to make a distinction between timeframes. Historically, we have a long track record of seeing stocks, as a group, performing well in long periods of time (5-10+ years). It’s not impossible to see a negative return over seven years in the stock market, but it doesn’t happen often. And if you’re well-diversified into the entire global stock market, it really doesn’t happen often. In other words, don’t just own an S&P 500 index fund, include small companies, developed international companies, and emerging markets. We’ll come back to that. But for now, let’s focus on timeframes. Take a look below. 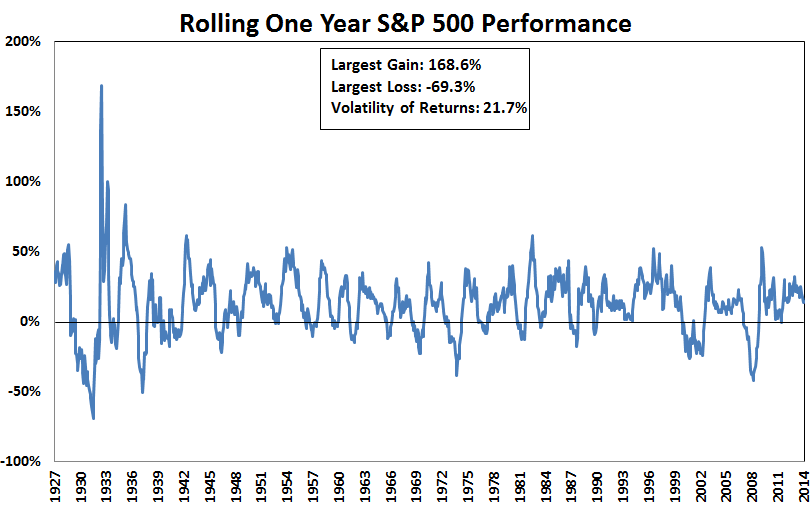 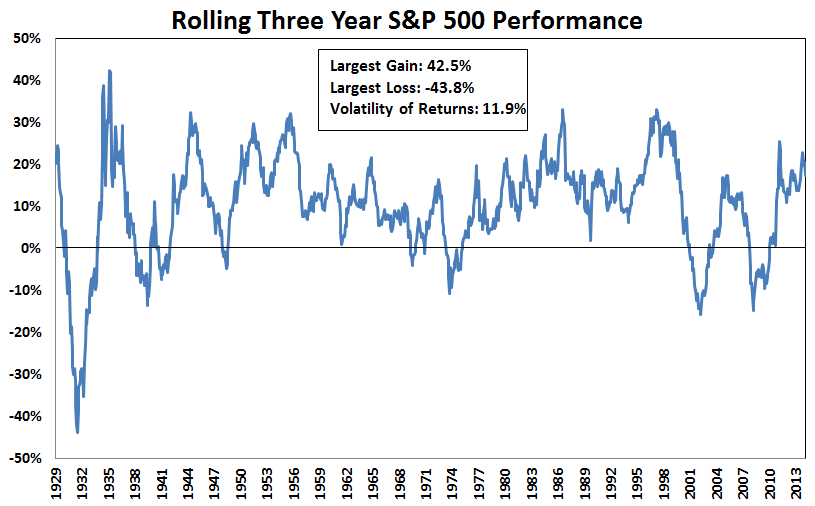 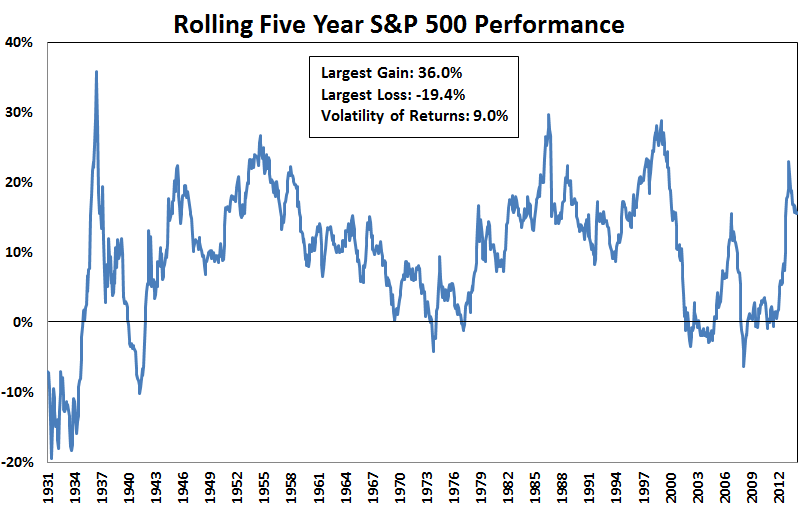 I think you likely get the point, but here it is. We have no guarantee of what the market will do in any one year. Three years? Still, a big unknown. Not just me and you, but everyone. The top analyst at Goldman Sachs has no idea. Over five years? We start to see less negative returns. However, they still happen every now and then.

Timeframes matter because if you always have 5 years of cash or bonds, you’re in a much safer position. I would argue that having this war chest is drastically more important than your actual stock/bond ratio. If you spend $8,000/month in addition to your Social Security payments, it makes sense to have ~$480,000 in cash and bonds in your portfolio. This means someone with $2Million may need a 75/25 stock/bond mix, while someone with $5Million could function with a 90/10 stock/bond mix.

That may sound like too much risk, but it’s more nuanced than that. If the $5Mil family has the emotional ability to handle that kind of volatility, and they genuinely spend only $8,000/month (drastically less than they could), then it’s not out of bounds. On the one hand, that’s a very aggressive portfolio. On the other hand, they still have five years of a war chest ready to use if the market struggles! With interest rates at their current low levels, I’m not a fan of having much more than five years in your war chest unless your risk tolerance is so low that you need it.

Disclaimer: if someone has significantly more assets than their retirement plan requires (like the $5Mil family only spending $8,000/month), then it can make sense to explore alternative investments in addition to the public markets. That’s another topic that I plan to write on at some point.

Main point: If you retired in January and had five years of your assets in cash or bonds (or bond funds), you have some serious cushion in your plan that allows you to sleep easy whether the market recovers sharply this year or not.

You’ll notice in those charts above that five years is not bulletproof. There have been times where the market was negative over five years. We can mitigate the effects of potential negative returns in rolling five year periods in two ways:

Planning with a Dynamic Withdraw Strategy

What is a dynamic withdraw strategy? Simply put, we’re thoughtful about where we take income from and how much we take in each year of retirement. You can do three things (well, I’ll limit this post to 3) to help your withdraw strategy:

For my clients that are retired, these are some of the things I think through. We discuss this continually because markets are not static. To maximize your retirement income, you want to assess these things every year continually.

Diversifying your Stock Investments to Help your Income Plan

Last point: we don’t want to put everything in the S&P 500. The charts above only show S&P results, but you can make your plan even safer by including other parts of the market.

Caveat: This is not a fool-proof way to avoid losses in a market crash! As you’ve probably noticed, the recent volatility has affected U.S. large caps (S&P 500), small caps, developed international, and emerging market stocks. You don’t diversify just to be safer in a 3-month market crash. You do it because you have no idea which areas will outperform over the next ten years. 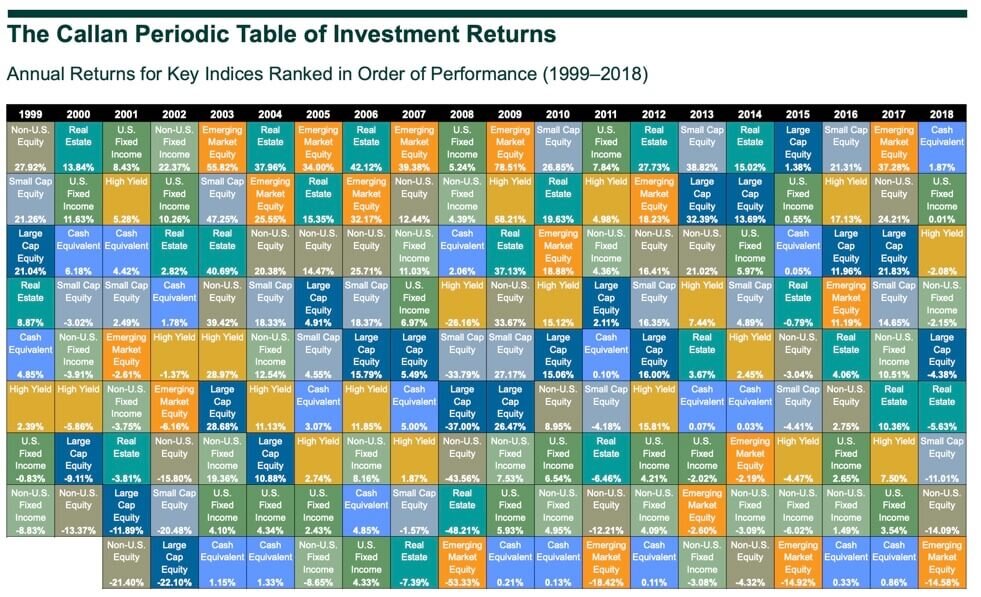 Notice: There isn’t one part of the market that always beats the others.

We don’t know what the next ten years will look like. So, for retirement planning, we need exposure everywhere. It makes no sense to me that someone would be willing to gamble their retirement income on the U.S. continuing to outperform. And I am by no means against U.S. stocks! But why not keep some of your U.S. position and diversify just in case history repeats itself and the U.S. has a bad decade at some point?

That wraps it up. As you can tell, a market crash is not the end of the world in retirement. In fact, you’re likely going to experience 5-6 of them in retirement and potentially ~25 market corrections. Volatility isn’t going anywhere. But that’s ok—a well built income plan can endure volatility.

The S&P 500 timeframe graphs are from Ben Carlsona-@awealthofcs

Oxy Open Enrollment: What Should You Do?