Saving a Fortune in Taxes: Your Guide to Roth IRA Conversions in Retirement

The Roth IRA has long been touted as an excellent savings vehicle for younger investors. They don’t receive nearly enough credit for the enormous value they can provide retirees. Roth conversions can be one of the most powerful tools to lower your tax bill, help your estate plan, and grow your wealth. For many approaching retirement age, properly navigating Roth conversions can have a six-figure impact on their wealth or more.

Executing in crunch time: Roth conversions in your 60’s.

Your 60’s are a crucial decade for your long-term wealth. It’s a unique combination of being young and old from a financial perspective. You’re young in the sense that you do not have mandatory distributions placed on you until you’re 72. You don’t have to take Social Security yet. This means you have flexibility and options that will begin to go away when you reach 70. At the same time, you’re also not young from a financial perspective. Compound interest has hopefully been on your side. Unlike your 40’s, you’re now starting to see the benefits of the working, saving, and investing you’ve been doing in the prior decades. In short, you now have meaningful assets, but you also have time to plan around them and lower your future tax bill.

Lowering your tax bill starts with understanding the difference in how your accounts are taxed. I could go into more detail, but to keep things simple, you have three basic tax structures that comprise your investment accounts.

For the average retiree, the heavy majority of their investable assets are in the tax-deferred “bucket.” For many at this stage, the Roth bucket is empty. It’s common for someone to have 3/4 or more of their assets tied up in their 401k/pension/IRA.

For example, let’s pretend that a fictional 62-year-old couple named Martin and Pam have 2.5M saved. Of that 2.5M, 2M is in their 401k and pension combined. Another $400,000 is in after-tax checking and savings accounts, and the last $100,000 is in their old employer’s stock. So, in our example, Martin and Pam have $2M in the tax-deferred and $500,000 in the after-tax bucket. To make things more straightforward, let’s assume they’ve paid off their house and plan on spending about $80,000 each year.

Most families in Martin and Pam’s shoes are not aware of the enormous tax opportunity in front of them. The vast majority in their shoes will take Social Security before age 70, and many will choose the annuity option with their pension. While there may be circumstances where that makes sense, doing so would eliminate their considerable tax planning opportunity.

Let’s discuss what could make the most sense for Martin and Pam. What if they hold off on any decision that would give them taxable income until age 70? No income tax sounds nice. But it’s even more strategic if, after we lower their income tax as much as possible, we then fill up those tax brackets with Roth conversions. See the picture below for reference.

In our example, Martin retires from his job in the year he turns 62. He may have severance or a bonus that results in a pretty significant income tax year. The next year includes more taxable income. This could be income from his spouse, Pam. Or, it could be the second installment of a bonus retirement payout. Quick note: If income is especially high in this 1-2 year period (potentially because of an NUA distribution from stock inside your 401k), there is a huge opportunity for bundling the next five years of charitable contributions into one year. I will probably write a separate post on that and other tax strategies in retirement at some point. Back to the topic. Let’s talk through each step of the timeline and see how Martin and Pam can dramatically lower their tax bill.

Let’s begin with the end in mind. You’ll notice the “future tax bomb” awaiting them after age 70. What I’m referring to here is Social Security + RMD’s (required minimum distributions) from their 401k/IRA + any other taxable income they have. The RMD starts at about 3.65% of your entire IRA balance. The RMD % increases each year. For simple math, let’s use 4% to calculate the RMD. Right now, the RMD is somewhat reasonable. 4% of $2,000,000 is $80,000. But, Martin and Pam have another ~8 years before they take the RMD. What if their IRA grows 6%/year until then? We’re now at about $3,200,000. Their RMD is now $128,000. Let’s not forget Social Security, which could easily be another $50,000+. How about one other factor? The current tax plan sunsets in 2026. We don’t know what tax law will do in the future, but it’s certainly possible that Martin and Pam will face higher tax rates in their 70’s and beyond. Higher income levels can also bring higher Medicare charges. Summary, Martin and Pam will live in a high tax bracket for the rest of their lives soon. Now, let’s plan to lower that future tax burden.

Let’s look at age 64. This is the first year where we don’t have any income. Martin and Pam certainly could take Social Security. After all, they were eligible when they turned 62. However, they’re deferring Social Security and will see their monthly benefit increase as a result. And for our purposes, it keeps their income low. The same holds true with their pension. They could have taken the annuity option (as I mentioned previously, this can be a good decision. That’s one thing I love about financial planning-every family’s situation is different and needs to be approached as such.) but have chosen to take the lump-sum and keep their income low. As you see in the image above, they will use almost all of their after-tax savings ($500,000) over the next 6 years before they turn 72. In doing this, they will keep their income tax very close to zero. This allows them to convert ~$100,000 each year to a Roth IRA. Thanks to the hefty standard deduction, they would only pay about ~$9,000 in income tax on this $100,000. And since they have six years until they reach age 70 (eight until age 72), this means $600,000 will move from their Traditional IRA to their Roth IRA.

Why could this be such a powerful decision for Martin and Pam? Well, let’s isolate that $600,000 that moves to a Roth IRA in our example. After all, they don’t have to do this. They could take their Social Security and their pension and take a small distribution from their IRA each year, and they could ignore Roth conversions entirely. If they do that, they will face the tax bomb that’s coming for them. To illustrate the power of moving $600,000 to a Roth, compare it to keeping that $600,000 in their Traditional IRA. 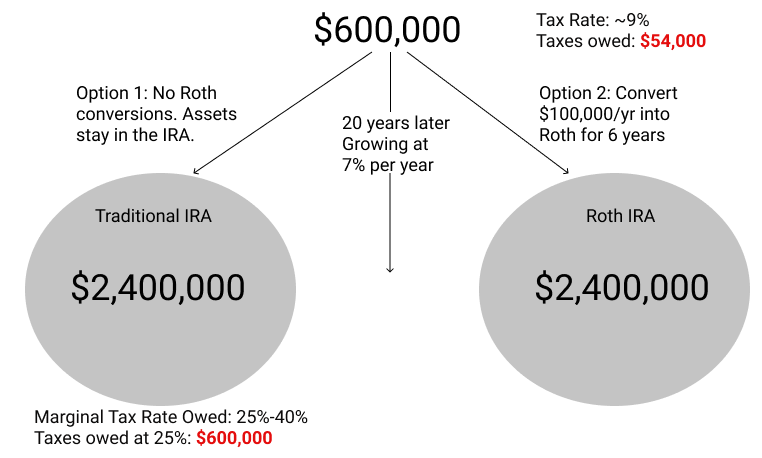 In the image above, you can see the opportunity for Martin and Pam if they pay a little bit of income tax now. Doing so means they will never pay income tax again in the Roth (& their children can inherit the Roth tax-free). I use a 7% annual growth rate for the account primarily because of the Rule of 72 makes it easy to calculate (7% growth means your account doubles every ten years). Pretty exciting, huh? $600,000 in a Roth could be $2.4 Million tax-free in a couple of decades. And they only had to pay $54,000 in income tax over those six years!

Now let’s look at the scenario on the left. Martin and Pam decide NOT to do any Roth conversions. So, that $600,000 stays in the IRA. It’s still invested, so it still grows just like the Roth–$2.4 Million But, we have to estimate what kind of income tax it could be subject to 20 years later. In twenty years, we’re still looking at Social Security and RMD’s. Hopefully, both Martin and Pam are still with us. If it’s just one of them, they will also face steeper tax brackets as a single taxpayer. We also don’t know whether taxes will be the same or increase or decrease (probably not the latter). It’s very feasible that the marginal rate they would owe on that 2.4M is somewhere between 25%-40%. Note: I use the marginal rate here because all of the lower brackets will be filled with Social Security, RMD’s, and any other income. Let’s be conservative and estimate 25%. Martin and Pam would owe $600,000 in taxes. That’s more than ten times the taxes owed a couple of decades earlier had they done the Roth conversions. What if Martin and Pam had more than $2M when they started retirement? The impact of Roth conversions could be even greater, as their future RMD and future tax rate and medicare charges would also be greater.

As you can tell, this type of strategy requires a great deal of planning upfront and year-by-year. It also affects every area of your financial plan. It touches your estate plan, your tax plan, your investments (Roth accounts should not be invested the same as traditional IRA’s), and your income plan in retirement. If you would like advice catered to your specific situation, reach out to us here.

Want To Retire From Chevron In The Next 5-10 Years?

Want To Retire From ExxonMobil In The Next 5-10 Years? 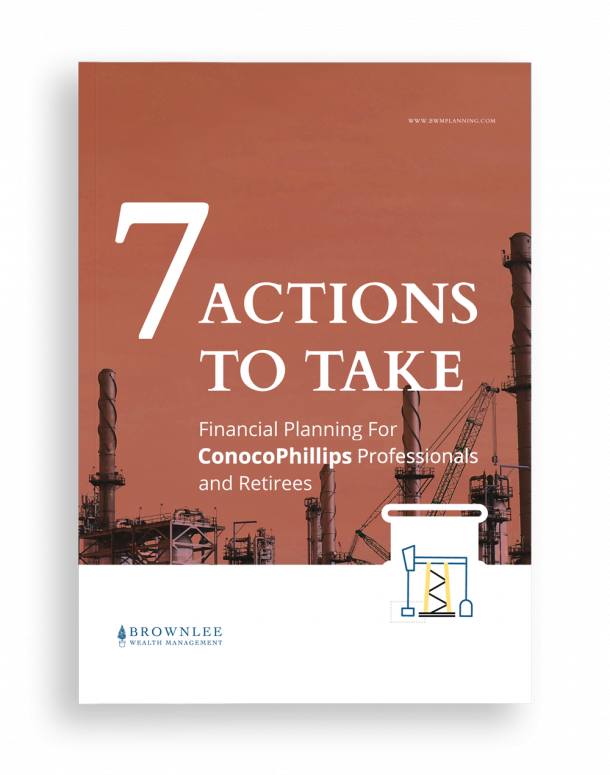 Want To Retire From Chevron In The Next 5-10 Years?

Why Do Most Wealth Management Clients Overpay? | Episode 37: FPOG Podcast